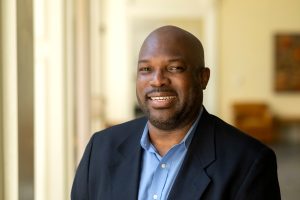 Onegaa J. McGhee (O.J.), has worked on the UNC Chapel Hill campus for over 20 years. O.J. is native of Washington, DC, and a graduate of Clark Atlanta University with a Bachelors degree in Mass Media Arts. He also holds a Masters in Telecommunications Management from Ohio University and is currently pursuing a doctoral degree in Educational Leadership at UNC Wilmington. Before arriving in the Tar Heel State, O.J. has worked at several television companies such as Black Entertainment Television (BET) and the Black College Satellite Network. He’s also worked on the campuses of Morgan State and Florida A & M Universities. Although his primary duties have been in the field of technology, you can usually find O.J. getting into his share of “good trouble” during his time in Chapel Hill. He has served as the former chair of the Carolina Black Caucus advocating for faculty and staff, as well as an Advisor for the Black Student Movement and member of the UNC Campus Safety Commission. He’s also been recognized with several awards through the years, such as the university’s 2019 Staff Diversity Award recipient and Black Alumni Reunion’s Hortense McClinton Staff awardee. O.J.’s inspirational quote is from the author and activist James Baldwin, which states “Not everything that is faced can be changed, but nothing can be changed until it is faced.”

How do you identify yourself?

List three things that people would be most surprised to learn about you.

-Directed the live video feed for the 1995 Million Man March

Whom do you most admire and why?

I admire quite a few people in my journey. However, the person I’ve admired most has to be my mother who as single parent living with Multiple Sclerosis raised me in the Southeast corridor of the nation’s capital with the values of hard work, perseverance, education, spirituality, and cultural awareness. Since my wife and I became parents, I am even more amazed how she continually made “a dollar out of fifteen cents” to ensure I would be the success my ancestors dreamed of.