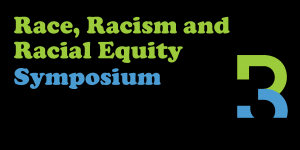 The third event in the R3 Symposium series, ARTivism: Using arts-based scholarship to interrogate and dismantle racism, opened with a spoken word performance by Chapel Hill’s inaugural Poet Laureate, CJ Suitt, who addressed these turbulent times. “It’s hard to be an artist right now. I’m tired of my poems being relevant, of Black pain and death being relevant. I want to place it in a world that once was,” they said. “…there were things that existed before that we can bring into the world as we reconnect and ground with each other. In the aftermath, I’m sure I’ll feel like a tourist passing through my own life. In the aftermath of all this, I’ll stand with you. We’ll brush shoulders and walk down the same aisles. We’ll never leave the party without a really good excuse. We’ll have hugs so close and tight the world will burst into giggles. The world will see me in full color: Black and American…”

His poetic delivery was an apt introduction for what followed – an examination of how UNC scholars and graduate students use the arts to help us better understand systems of oppression and their impacts, challenge white supremacy, foster dialogue around race and racism and advance racial equity. Co-hosted by the University Office for Diversity and Inclusion, the Jordan Institute for Families and the UNC School of Social Work‘s Office of Diversity, Equity and Inclusion, the presentations were riveting and thought-provoking:

Susan Harbage Page, associate professor in Women’s and Gender Studies, is a visual artist who uses photography to capture powerful images of border closings’ real human impact. In “The Anti-Archive of Trauma,” her images of objects left behind at the Mexico/U.S. border were brutally informative: a dirty bra, likely torn off of a woman during an assault; a wallet thrown away by a Honduran teenager who feared he’d be forced back to the country he’d fled rather than just to the other side of the river; a prayer book that provided succor for the faithful, and more.

Another series of images, titled “Humanizing the Border,” portrayed Susan prostrating herself in silent protest across bridges, atop mountains, in front of gates. These are all borders that she was allowed to cross due to her privilege of being a free, white, American UNC faculty member, while others were forced to risk their lives to do the same. “Borders are imagined creations by nation-states that allow them to act out their powers,” she said. “At the end of WWII, there were seven border walls. In 1989, there were 15. Now there are over 77. When will we start building bridges instead of walls?” 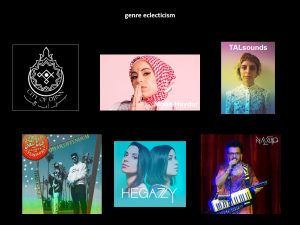 Michael A. Figueroa, assistant professor of Ethnomusicology, presented research that examines how music can be a critical entry point for understanding how Arab Americans fit into the picture after the fallout of the 9/11 attacks and recent white supremacist actions. As someone who is both Arab and Latinx, his narrative was facilitated by music. “Discourse brings together scholarship, arts and activism,” he acknowledged, introducing R3 participants to such developing concepts as post-Tarab as post-migrant aesthetic, musical experience as a communal metaphor, interrogating racial analogies, Moustafa Bayoumi’s statement, “We’re the new blacks,” in How Does it Feel to Be a Problem?, fostering intersectional interracial solidarities, and advocacy for SWANA (Southwest Asia and North Africa) rather than MENA (Middle East and North Africa, a colonialist terminology).

His presentation of marketing materials, such as yallacountmein.org urging Arab Americans to participate in the census; Arab American music, such as the Yalla Punk Music Festival, which provides food for the community; Tarab NYC Queer Arab Events, and more displayed the outlets by which Arab Americans find their common artistic and activist social connections. “Within these,” he said, “it’s possible to tell a broader story about race, racism and racial equity by a particular group that makes up only 1% of the U.S. population.” 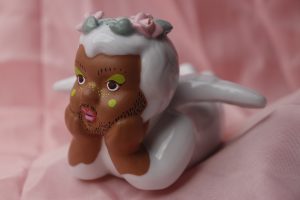 MFA Graduate student (and the gifted graphic designer who created the intriguing R3 logo) Charlie Dupee shared his delight with kitsch angelic figurines that he’d find at thrift shops. “I thought about the relationship of objects, and what [these white images] represent. They assumed lightness as normative and central to humanness. It made me wonder about the representation of people, specifically black bodies throughout U.S. history,” he said, sharing images from the 1805 painting “Slave Quarters with Field Hands at Work” to reveal suggestions of Black people as merely hands to farm the land rather than people with agency, Louis Agasiz’s daguerrotypes of enslaved people as inferior and Judy Garland appearing in blackface in film. “This reduces Black humanity into stereotypes and dehumanizes Black people as lazy, stupid and savage.”

Charlie’s novel approach is to flip the narrative using figurines. In what he called “an act of radical self-love and vanity,” he’s hand-painted the figures into his own image to contextualize them. What was once a blonde-haired, blue-eyed, peach-skinned female angel is now a black-haired, brown-eyed, brown-skinned one with both flamboyant eye shadow and a light beard. “It coopts narratives already implicit in the forms – fragility and vulnerability. This evidence of a flawed system highlights that the U.S. was not created with everyone in mind. I hope to encourage people to think critically about the forms of representation they see around themselves.”

Jacqueline Lawton, associate professor in the department of dramatic art, creates theater that reflects the human condition, pushes boundaries and uses powerful and provocative language that addresses politics, social justice and love stories. “Love is the driving force of life and at the heart of the theater and the foundation of hope.” She described her work as “disrupting white supremacy one play at a time by writing about Black folks.”

In So Goes We, she looks at the impact of racism and Haitian immigration, following women on their harrowing journey; in Freedom Hill, about Princeville, NC, the oldest historical Black town in the U.S., which is still in the process of rebuilding after a 1999 hurricane, she examines environmental justice; in Ardeo, she tells the stories of burn survivors and health professionals from multiple points of view, noting, “Burns are equalizers and there is a recovery process to reenter life with a transformed body”; in The Wonderful Wizard of Oz, a children’s theater production, she modified the original by basing it in Nicodemus, a real town in Kansas settled by Black homesteaders who went west for autonomy, and ensured that there were racially inclusive munchkins; in Intelligence, she addressed CIA officer Valerie Plame’s outing by the Bush administration, placing a Black woman on the case in a high position in the CIA; in The Hampton Years, she examines Black and Jewish relationships, looking at a shared history of oppression; in Edges of Time, opening via Playmakers March 22, she tells the story of Marvel Cooke, the first Black female investigative journalist to write for multiple newspapers, and explores how one individual can uplift a community.

Writer, director and performer Dr. Sonny Kelly uses the power of life experience to raise consciousness in an audience and is committed to “deliberate discomfort.” His one-man performance, The Talk, is based on the conversation that he – and many other Black fathers – have with their sons to prepare them to safely negotiate in a society built on institutionalized racism and white supremacy. His new performance, Haunted (opening on March 27), traces the roots and routes of modern-day anti-Black violence in America and the perception of Blackness that haunts us all. “I am a cis, hetero man in America. I’m not supposed to cry,” he said. “I must code-switch. But why should we have to? I strive to cry and feel with the hopes that someone will watch my story and not reject me but affirm me even if they don’t agree with me.”

A lively Q&A followed, with participants wanting to know more about how to support the work of these artists. “One way is to just listen by trying to engage critically and looking at your own life and applying what you’re learning every day,” advised Charlie. “Part of that engagement is sharing thoughts you got from the work with others who haven’t seen it. Artists can’t find everyone. We’re not invited to every single space.”

The event was the first to address how the arts can be used for activism. “Art can touch our hearts and open us up to challenging conversations,” said Allison De Marco, R3 co-convener, Advanced Research Scientist, Frank Porter Graham Child Development Institute and Equity Lead, Jordan Institute for Families. “I’m so grateful to these six performers, scholars and truth-tellers for sharing their work with our community and calling on us to think about how we might confront white supremacy.”